Few more hours on the black exclusive tonight. Swan necks pretty much done now. Still some little bits of flatting to do with the finger sander, but I still didn't manage to get my compressor here yet 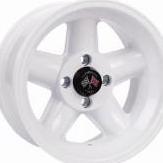 Seen this, thought id stick it up for inspiration, like the black. Silver graphics look Well too!  Project images are available to Club Members Only, Click to become an OMOC Member.

As above not sure if they was a factory fit but there's markings to cut out inside bumper. Slow progress today really. Struggling to get the hang of this new welder, spending more time faffing wi