Manta Advert from the 1980s 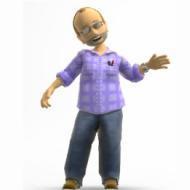 By PaulXLE,
December 6, 2019 in Saying Hello and Welcome