Somewhat of a return - mothballed project 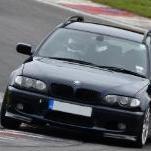