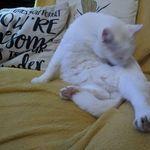 By FlanFlinger,
September 7, 2017 in Saying Hello and Welcome

Hi   I'm trying to build a database of Centaurs, I'm working with two partial lists, one supplied by Richard of the Cavalier & Chevette Club and David, Barry and Sean of the Crayford own

Just found a picture I took a couple of years ago.

That's number 61, it's certainly doing the rounds of the shows, that's the second set of pictures I've received of it in the past couple of days, the others din't show it had been defiled with a manta